From a news perspective it’s been an intense start to the year. As one meme put it ‘What a year this week has been.’

Like many, I found myself glued to the broadcast coverage of the attacks on the USA’s Capitol building, switching between UK coverage as well as CNN and Fox.

Reporters on US news channels were emotional, even furious. Calling rioters thugs, racists and criminals and citing Trump’s behaviour as ‘lunacy’, dangerous and disgraceful. They were, for the most part, bold in calling out his incitement of an insurrection.

Here in the UK, our own Government has been heavily criticised for its failure to explicitly condemn President Trump’s part in inciting the events, despite strong statements from Angela Merkel and Swedish PM, Stefan Lofven, who have been clear in linking the President’s behaviour to what unfolded.

The contrast in the UK’s reporting and our Government’s careful phrasing of its response to the events has made me reflect on comments from former BBC Chairman Lord Grade towards the end of last year, in which he said the impartiality rules governing UK broadcasters were an anomaly and a ‘relic of a bygone time’.

In the run up to the recent US election I have often been grateful for those impartiality rules as I watched in horror the dangerous – and often factually incorrect – rhetoric spewed without impunity by some US broadcasters. Whilst I know strong bias exists in our media, on TV it is at least kept in reasonable check. However, last night I found myself enjoying – and valuing – the flip side of the coin, watching in admiration as US broadcasters did not pause to call out the behaviour they were witnessing as wrong. One by one they stepped up to lay the blame for the events at Donald Trump’s feet without some production executive yelling furiously in their earpiece.

Would I like to see our election processes heavily influenced by news presenters as they are in America? No. But was it a refreshing change to see people unequivocally call out bad behaviour? It certainly was. 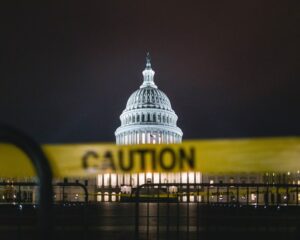